Students from Fulston Manor School joined other schools from Swale and dignitaries from Swale Borough Council on The Journey of Commemoration to Ypres on Armistice Day.

Students from Fulston Manor School joined other schools from Swale and dignitaries from Swale Borough Council on The Journey of Commemoration to Ypres on Armistice Day. The Civic Office have organised the trip each year on the 11th November since 2014, as part of the WW1 Centenary activities and will continue to do so until 2018. The early start at 4.00am did not deter any of the students, school staff or council staff from taking part and all were honoured to represent their school and community. The students took part in the Poppy Parade through Ypres town centre, lined by hundreds of people, and then stood amongst the regiments and bands throughout the ceremony at the Menin Gate. Joined by Her Royal Highness, Princess Anne and her husband Vice Admiral Sir Tim Lawrence, the crowd listened to prayers, music, hymns, readings and, perhaps the most poignant, the Last Post. Thousands of poppy petals were dropped from the top of the Menin Gate in remembrance and gratitude to the soldiers who died during WW1. Dignitaries from around the world lay wreaths.

After the ceremony the students were given some free time and wandered around Ypres, popping into the beautiful cathedral and, of course, the chocolate shops. A visit to one of the vast number of cemeteries in the afternoon really brought home to the students the amount of young men killed in the ‘War To End All Wars’. Year 9 students Katie-Jane and Alex were humbled to take part saying “This has been an incredible experience to take part in the parade and pay our respects to those that died 100 years ago. Seeing the headstones in the cemetery somehow made it all very real”. 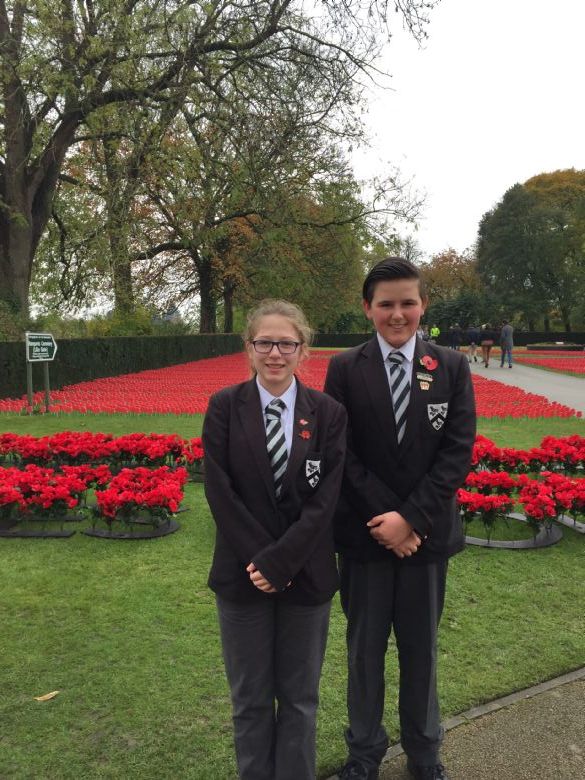