Year 9 student Ryder Delport spent the end of his half term travelling to Barcelona representing Soccer Elite FA in a European tournament.

Year 9 student Ryder Delport spent the end of his half term travelling to Barcelona representing Soccer Elite FA in a European tournament. Setting off from the UK on Friday 26th October Ryder, who normally plays right centre midfield, joined his team mates to play against seven other countries but was taken out of his comfort zone and asked to play right-defender.  The matches were hard fought but Soccer Elite were victorious in most of their games, taking the trophy for the Group B Division. The tournament rules were if you drew against another group with the same points they went through on goal difference. Elite Soccer had beaten Finland 4-2 in a previous match but, sadly, Finland had 2 goals more than them overall and went through to the final. The final was won by Sweden. Ryder, a Morrison House student, said “It was great fun. All of the other teams and the referees were really friendly, and it was great to meet and experience people from different cultures”.

Ryders other hobbies include playing cricket for Upchurch U14s on a Sunday morning. Although only 14 years old he has impressed the club so much he was asked to play with the U16 squad and the men’s teams on both Saturdays and Sundays. 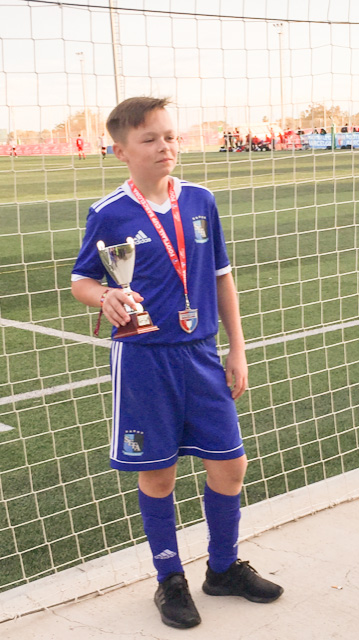