Romilly Streets Ahead Of The Others

Year 7 Morrison student, Romilly Harding recently travelled to Germany with her dance crew from Shake That.

Year 7 Morrison student, Romilly Harding recently travelled to Germany with her dance crew from Shake That. They were taking part in the World Street Dance Championships along with 34 other teams and it was a fantastic experience for the girls. It was a tough competition for them and unfortunately they were only one point off being put into the next round. However, Romilly and her duo partner made it through several intense rounds and finished an impressive 34th.

Mum, Kirsten said “It was a very different experience to anything Romilly’s ever experienced so far in her dance career and I’m so proud of her for trying so hard. In the last 3 months, she has trained daily, from 4-9pm every night and for hours at the weekend.  She now has the British finals in a few weeks’ time, at the K2 in Crawley, where she has qualified to dance in the solo, duo, team and crew categories and after that, wants to try to qualify for the Europeans next June”.

Romilly commented, “I had a really good time in Germany and it was a fantastic chance to bond with my crew. I think Mum is proud of me!”. 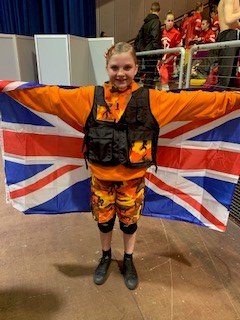