From Boys To Men: Students Invited To International Men's Day

On November 12th, ten Year 9 boys woke up and started the day in a different way to normal; they knew they wouldn’t have the traditional lessons of Mathematics, English and Science, but they didn’t realise all the other lessons they would learn instead.

On November 12th, ten Year 9 boys woke up and started the day in a different way to normal; they knew they wouldn’t have the traditional lessons of Mathematics, English and Science, but they didn’t realise all the other lessons they would learn instead.

Fulston Manor School was lucky enough to get tickets to the annual International Men’s Day Conference at Canary Wharf, hosted by Rocking Ur Teens, a company devoted to raising aspirations of young people in today’s society. The boys visited Thomson Reuters, one of the largest office spaces in Canary Wharf and threw themselves into their new corporate setting.

They were lucky enough to meet Ragz CV, a spoken word artist who is devoted to helping young people accept who they are and to admit when they don’t feel ok; something that young male students often struggle with. In addition to the performances and the inspirational speech he gave, the group were also able to meet a variety of men involved in various different businesses; from a project manager at the National Grid, to a charted accountant in Canary Wharf to a young man who used to be a dancer, and is now pursuing his dreams in politics; looking at inclusion and diversity. Miss Jeffery (English) joined the boys on the day and said “To say that the trip broadened their minds and allowed them to experience a corporate setting would not sum up the day they had. The boys fearlessly answered questions in front of 130+ people, they asked insightful and engaging questions, engaged in speed mentoring and during their lunch break, went and networked with the other schools, meeting young boys just like themselves. So, they may not have had Mathematics, English or Science, but they definitely learnt a few lessons in acceptance, resilience and that it is ok, not to be ok”. Morrison student, Justin Newbury said “It was a really good day and we learned so much. We learned about who we were and what we could be. I’d recommend this trip to everyone in the future”. 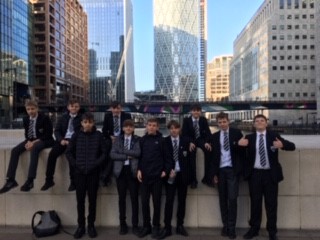