Since achieving his black belt in Taekwondo this year, Morrison student Marcus Duplock has been busy competing in two impressive competitions.

Since achieving his black belt in Taekwondo this year, Morrison student Marcus Duplock has been busy competing in two impressive competitions. The first, held over the  16th and 17th November saw Marcus travel to Swindon to compete in the PUMA British Taekwondo Championships, a domestic competition attracting various clubs from the UK where he managed to reach the final, taking it to extra time following a draw. He narrowly lost out on the gold medal, instead having to settle with silver. Following this, Marcus competed at the ITF Open British Championship in Crawley. This attracted high level competitors from 12 different Countries. Despite suffering an injury to his ribs Marcus managed to obtain a Bronze medal. He said “My ribs really hurt but that wasn’t going to stop me competing and I was both shocked and pleased to get the bronze medal”.

The brave and determined Year 8 student now has his eyes set on next years competitions. Marcus has been selected to represent his club 'TSA Taekwondo' to compete in the Open Dutch Championship in January 2020. Mrs Palmer said “Marcus is taking after his older brother Joshua by becoming a black belt and winning amazing trophies in his chosen sport. We wish him every bit of luck in January and just ask that he comes back without injury!” 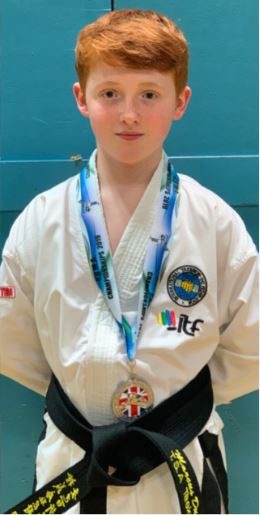