Sisters, Abbi who is in the 6th form and Morrison House student Jodi, were delighted to take part in a week-long visit to China together with six other young ladies from the Medway based Anchorians Football Club.

Sisters, Abbi who is in the 6th form and Morrison House student Jodi, were delighted to take part in a week-long visit to China together with six other young ladies from the Medway based Anchorians Football Club. The all-girl team were invited by the FOSHAN Chancheng Government to take part in a friendly football tournament and, while there, attended a class at the 14th Secondary School in Chancheng and joined in with a full range of activities which included Chinese dumpling making, the art of Chinese calligraphy and even tried their hand at pottery classes. The team were greeted upon their arrival by 1200 students and staff from the Secondary School and interviewed by local television. The team from Anchorians were the Cities guests of honour during their stay and attended a welcome Banquet and various other ceremonies during their stay. The exchange trip would not have been possible without the assistance and various liaising from local Businessman Ming Yau who owns Confucious Chinese Restaurant in Chatham and worked tirelessly on the exchange. 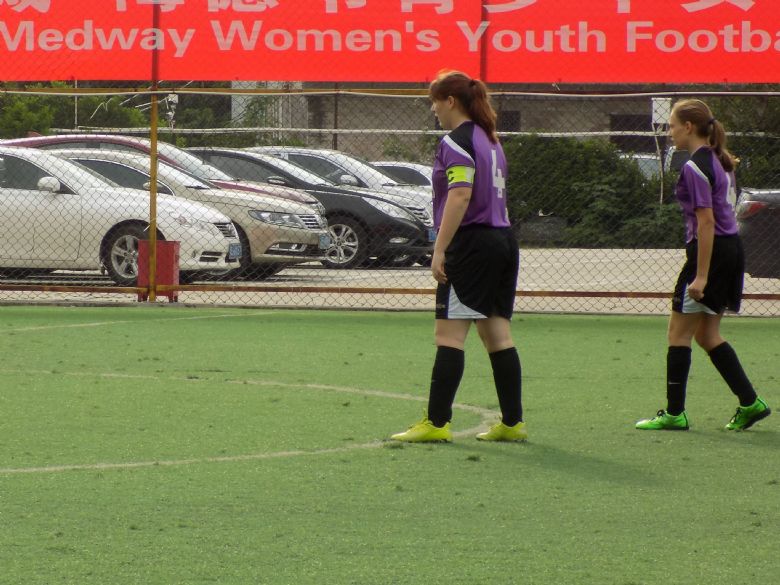 The intrepid travellers were invited to a farewell celebration. The children impressed the group with their brightly coloured sparkly dance outfits with Pom Poms and tassels performing various "cheer" songs. With very little warning the team then had to reciprocate ..and chose singing to impress their counterparts. Realising very quickly that they needed a distraction because they were quite a "unique" sound and nothing like the One Direction tract they were singing, they grabbed some of the cheer girls to join them on stage.... To anyone else it made them look like they were forming friendships, however they merely just saving themselves!

Abbi and Jodi thoroughly enjoyed their time spent in China especially the football games. They were incredibly pleased to win all three games of football, despite the searing heat, and brought the trophy back to England. It has been a busy time for the girls with Abbi recently being signed by United Sports for a scholarship which will see her leaving home in 2018 and travelling to the United States of America to further her football career. She said “ China was amazing and it was great to see the different culture. Everyone was so friendly. I’m really excited about going to America but don’t know the details yet”. It is plain to see that Jodi idolises her older sister and mentioned that she wants to follow in her footsteps by going to America. With her skills and enthusiasm this will, no doubt, happen.